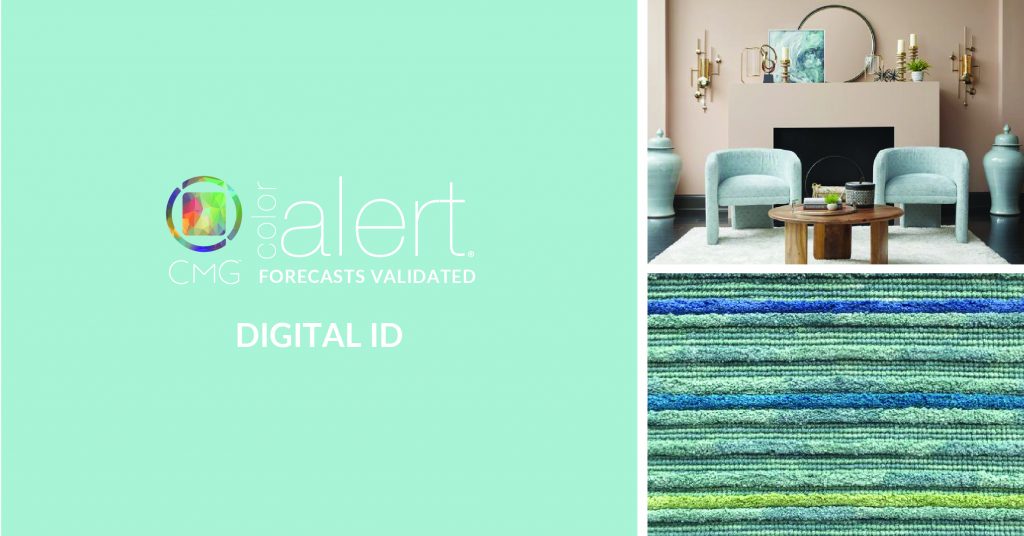 Blue represents the essence of self …

… at least the digital social self. Digital ID has emerged as a new hue, bridging color for the technology of who we are, on the planet we want to embrace. It is neither specifically science nor nature-based but instead hovers between the two as an identifying color that has a cool, modern, slightly off-beat appeal.

A light blue with a subtle green influence, Digital ID has emerged from its predictive roots, in Latin America Color Marketing Group meetings in 2019, to become an important global color for 2021. Its meaning has shifted slightly as the world continues to rise against the pandemic. Technology has proven its place during the last 18 months, as well as the need for nature, and this blue color literally and symbolically clears the air with a new age of fresh ideas, goals, and health.

Digital ID moves easily from modernity to simplicity, as it establishes itself as a symbol for technology’s buzz as well as nature’s freshness. The tech impulses and desires of Gen X, Y, Z, and Gen Alpha (and tech-involved Boomers) are concentrated into their digital identity. They are curating how their individuality is being presented and preserved in social media and attempting to define who are they beyond their social media accounts. Privacy concerns, energy usage (devices can require a lot of power), and individuality are primary goals as the generations move forward, and can be represented in a color that is fluid, embracing, and open.

This blue hue bridges consumer desire for freshness and familiarity with new technologies such as smart devices, wearable tech. It is a hue that is embraced differently by each user while still recognizing its contrasting inspirations from digital to natural.

Tech and nature will live together blissfully in this hue, so where is it going to go? Digital ID is strongly indicated in hospitality settings, where guests desire combined experiences of mod cons and organic elements. It is the glowing blue screen light of a device, as well as the crystal clear color of a cloudless sky. Used as an accent color in furnishings, accessories, and architectural coatings, it raises blue to an aspirational color, able to accomplish multiple goals, and inhabits numerous meanings. Whether in a hotel, restaurant, or lounge space, it adds an important color note. Interestingly, as workers move back into their offices, Digital ID will become a bridge color from home to workspace, providing a consistent flow between the two. Expect it, also, to emerge in residential and commercial settings beyond hospitality that nevertheless need to achieve the same vibe.

Shimmer in the glow of technology, inhale the freshness of the air and recapture your social identity with Digital ID, the color that bridges them all.

Our December Color Alert, Hugging, is a step away

Our December Color Alert, Hugging, is a pure red w

Our North American key color, Azoic, is the only y

Bring the world of color to your inbox with CMG events updates, our monthly Color Alert® and more.