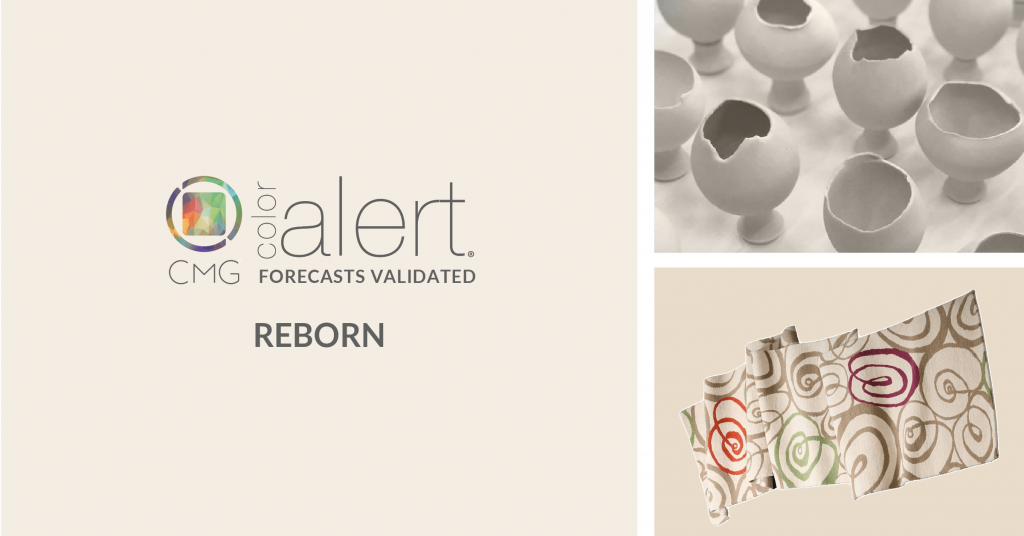 It’s a blank canvas, a fresh start, the absence of color, the brightest light, the ultimate chakra. Take your pick at what it may personally represent, it’s all white.

Emerging from CMG European meetings in 2019, with expectations to appear in 2021, it has come roaring into place and is not held solely by the continent. The aptly named Reborn has global aspirations and acceptance to wipe the slate clean of the past couple of years and embrace the new.

As simple and unadulterated as it may seem, It does get a subtle hint of color with a slightly creamy glow that gives it a sense of inner light. The nuance is just enough to add an underlying interest, but still keep a sense of an easy, pure hue. With a knowing wink, the essence of Reborn may have a few iterations of its value and nuance, but in the end, it is still white.

As a mixer in design, it is a useful as water in a cocktail. It can sharpen a space, surely, but also act as a catalyst for colors that need a bit of balance and a rest for the eye. In nature white is a connector. The floating clouds and wave crests flow around the world, the former changing as they drift with the winds and the latter seeming to move from one shoreline to the next.

“But there is always white.” True, but it is not always a Zeitgeist capturing color. Now, it is.

In fashion, it is a rebel to be worn irrespective of the season. It adds a punch and high contrast to dark colors in a way usually reserved for high-chroma hues. It can stand on its own, or be a catalyst to make everything else look more alive. It has an “in your face” attitude as white is used as a punctuation point in accessories, often in seasons around the world that used to eschew white except for summer wear.

Interiors are also getting a boost from this non-neutral neutral. The nuanced warmth makes for comfortable spaces that helps embrace the general warming trend of interior hues. Working with everything from navy and dark green, to cocoa, red, and black, it was once a standard color, but now one exudes a new life. It even works with a variety of greys to raise their relevance and make them appear fresh.

Reborn is a companion, a mixer, and a stand-alone statement. It is a way to move from one year to the next, in season-less color style.

Our December Color Alert, Hugging, is a step away

Our December Color Alert, Hugging, is a pure red w

Our North American key color, Azoic, is the only y

Our North American key color, Azoic, is a nutrient

Bring the world of color to your inbox with CMG events updates, our monthly Color Alert® and more.